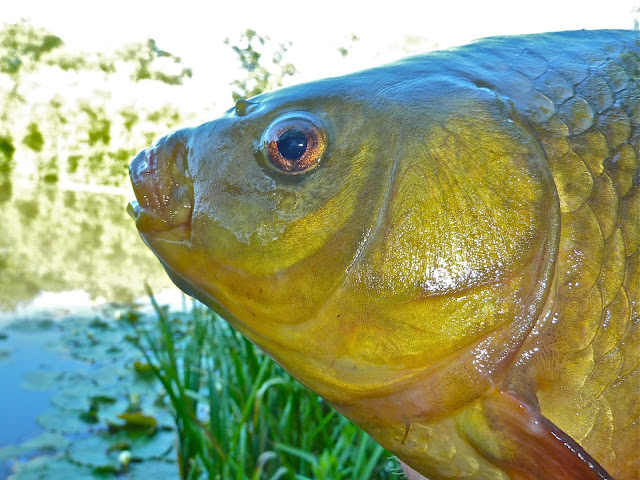 Crucians. Magical aren’t they, these little golden beauties that live in such glorious corners of our most peaceful spots of the countryside. No wonder we love all the challenges of fishing for crucian carp so much.

The first challenge is to find a water that contains true crus, ones that are unsullied by cross breeding with various forms of king carp. Fortunately, we are blessed with a campaign to raise the profile of these special fish. The Angling Trust and crucian enthusiasts have got together to form the ‘National Crucian Conservation Project’ to encourage clubs to create waters where they have a chance to thrive. They have even made a film to highlight the need to do so which is presented by my fishing pal, Martin Salter. View at : http://youtu.be/XAWOzJ6SF-0

I’m happy to say that my local Christchurch Angling Club, encouraged by it’s members, are creating crucian waters from three pools that were once ‘ordinary’ carp waters … and we’ve got more than enough of those around the country haven’t we. The club have removed all the king carp from the three pools at Holtwood and are stocking two of them with crucians and tench, happy swim mates everywhere they live together. I’m excited at the prospect of fishing them when stocks have settled down … and I know I’m not alone.

How will we know the crucians are pure I hear you ask and the answer is simple. Peter Rolfe, The Godfather of all things crucian has supplied the stock from one of his fisheries, the one which I filmed with Chris Yates and Martin Bowler for our Ch 4 series “Catching the Impossible”.

It’s the smallest of four pools which Peter manages as crucian breeding ponds [before retiring from the two biggest]. The stocks are moved from the smallest to biggest as necessary and surplus stock sold to angling clubs, including Christchurch in order to fund the work. The smallest pond was emptied and dredged recently and you can read all about it and see the mud! on Peter’s website : http://www.crucians.org/

Peter has written a delightful ‘bible’ - “Crock of Gold” –  ‘seeking the crucian carp’ - and I can highly recommend it if you want to learn everything about crucians and even how to catch them. It’s available from Calm Productions and also recently from Amazon.

Peter is just adding the finishing touches to a book about his creation of one of his Victorian Estate Lakes called “Reflections on Still Water’. I was privileged to have a sneak preview of some of the words and have fished this beautiful water a lot, so get your credit cards ready. It’ll be worth it.

And he’s not finished yet, for he has six more small ponds which he is restoring so he can supply even more true crus to clubs with the good sense to stock waters for their members. No wonder Peter is nicknamed ‘The Crucian Crusader”.

I realised that if I was going to bang on about crucians I’d better go and catch one or two and so earlier this week I had a session at the syndicate's prime crucian water, Eelstage. To say I was surprised by the result is an understatement as I caught thirty four crucians averaging exactly two pounds to a best of 2/10.

Sixty eight pounds of gold, all on pellet and pole and in one of the most peaceful corners of Southern Britain. Surrounded by wildlife, the warm air filled with blue sky and bird song, it’s difficult to imagine enjoying fishing more – ever.
Posted by Hugh Miles at 15:59 10 comments: