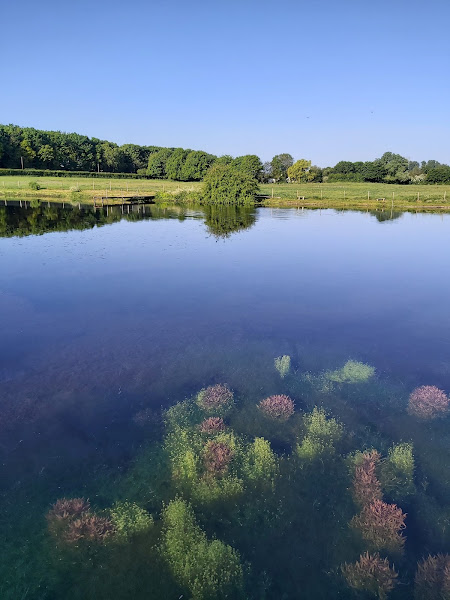 ‘Variety is the spice of life’ and that’s never truer than if you’re an angler. So when our local Wimborne club offered us members a ‘Trout Taster Day’ to learn how to catch one, I jumped at the chance to learn about fly fishing and move closer to nature.

Our location was one of the club’s trout lakes just a few minutes drive west of Wimborne at rural Winterborne Zelston, the village’s name identifying the source of the crystal clear chalkstream water that creates the perfect home for the many trout that, as we arrived, encouraged us with their swirls. Watching the cruising fish as they swam in a garden of colourful aquatic weed, it looked very beautiful - and the fish were big! 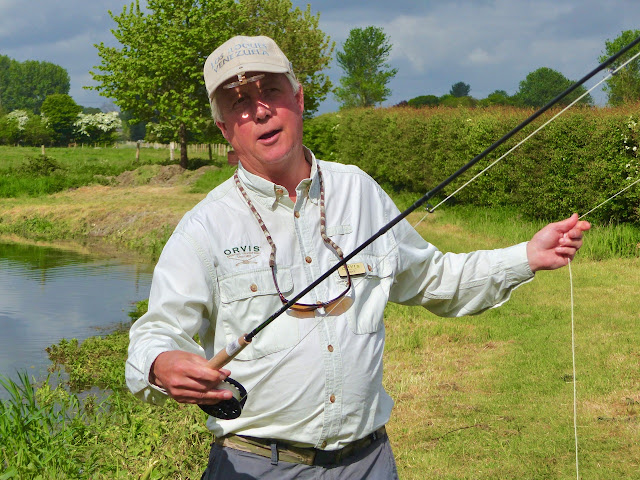 Our tutor for the day was the renowned guide Mike Bilson. He’s fished all over the world for a wide variety of species, so we were lucky, indeed privileged to receive the best possible advice to help us get started. After essential health and safety instructions, most notably to wear glasses to protect our eyes, he gave us sixteen beginners guidance on the most suitable tackle to use, on how to identify what the trout might be eating, then how to cast the imitation flies to fool the fish. 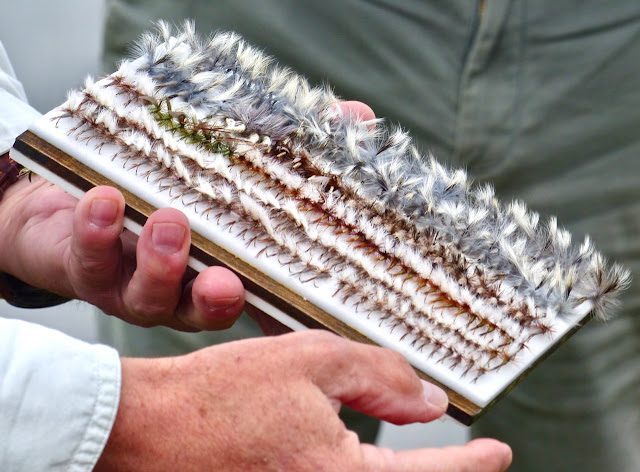 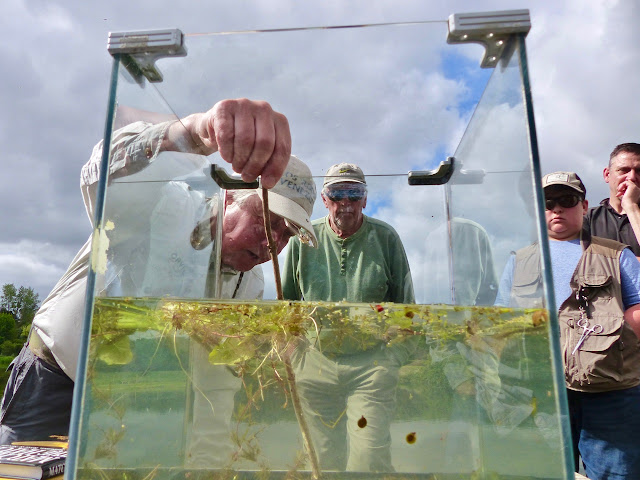 There’s a bewildering selection of invertebrate life in the lake, from damsel nymphs to cdc's, sedges, upwing olives, daddies, floaters and sinkers but learning the lingo is all part of the fun and some of the great books that were brought along for us to study will impart the knowledge we will need as we develop our skills. 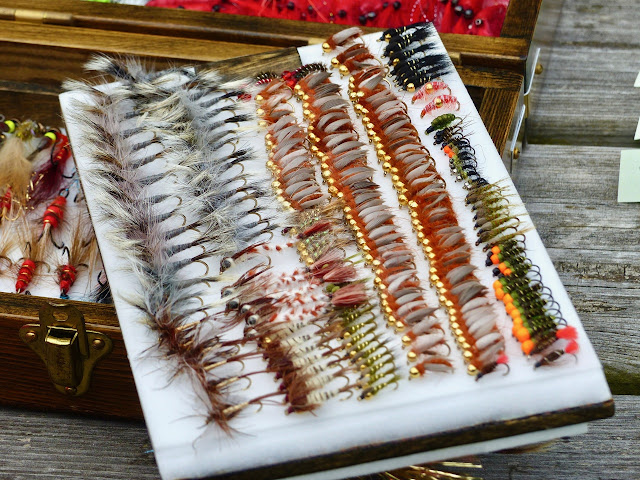 John Goddard was a god of fly fishing during his life and has written a few bibles in his time and of Peter Lapsley’s many books, ’Matching the Hatch’ is one of the most useful. 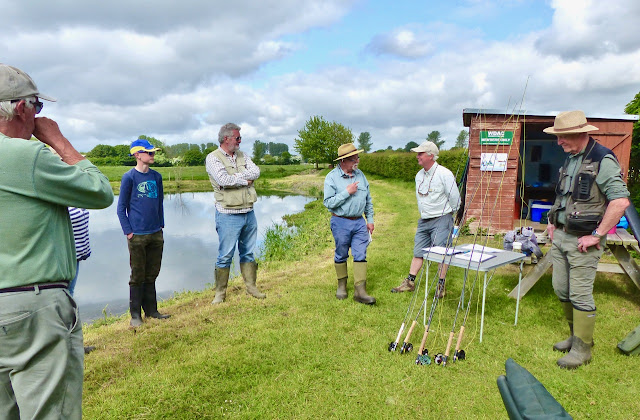 Mike, and Mike Hirsh our chairman alongside him and our Game Secretary on the right, Paul Baker who organised the gig, said that the most suitable tackle for this lake was a 6wt rod with middle to tip action, a reel with a good clutch loaded with 30yds of backing and a weight forward floating fly line attached to a tapered leader of 9ft. Along with a few flies, this lot will cost you about £100, so it’s not too expensive to get set up and start a lifetime of thrills and if any further help is required, then Paul is always on call, when he's not catching trout! 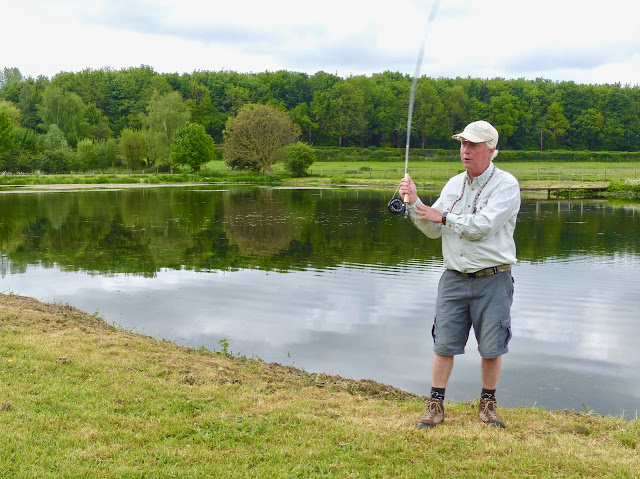 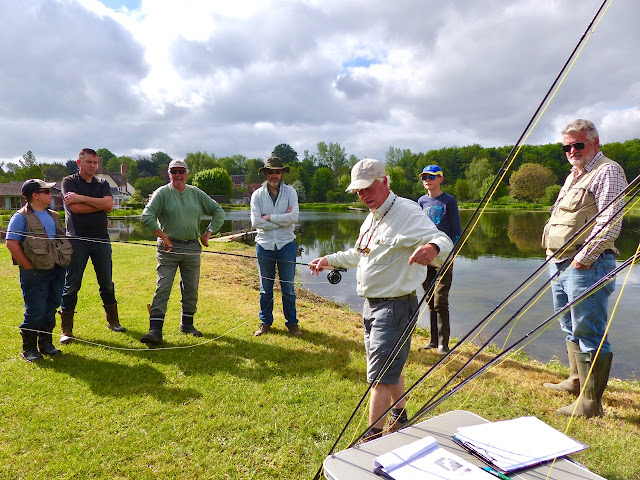 Once Mike had taught us enough to make it more likely that our casting would result in the fly landing on the water instead of the hedge, we were each promoted to our personal instructor for one to one coaching. The club’s Game Secretary Paul had masterminded the event superbly and had pulled together a large team of volunteers to ensure the day was a success. So when twenty of us ‘students’ arrived in perfect sunshine, we were able to admire an immaculate fishery along with a host of willing guides and their tackle.

Many of the clubs trout fishing stalwarts had given up their day to help us in our faltering steps to become fly anglers and the quality of Mike Bilson’s instructions and our guides was proven by the fact that everyone caught at least one lovely rainbow trout and all were big enough to put a serious bend in our rods. One lucky tyro even caught a monster of eleven pounds! The smiles of triumph from both young and old made it a delightful day for us all. 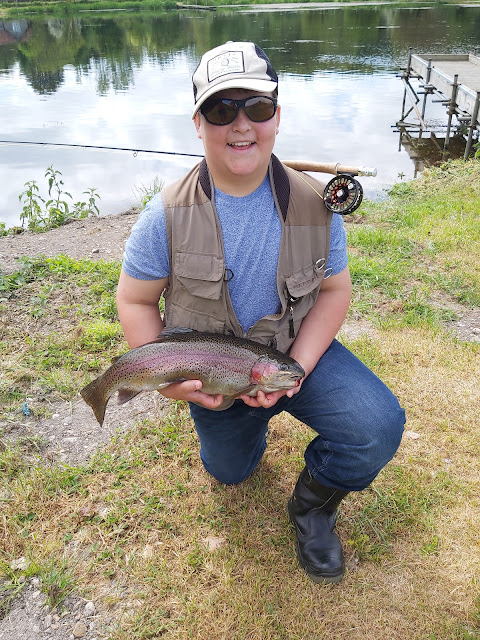 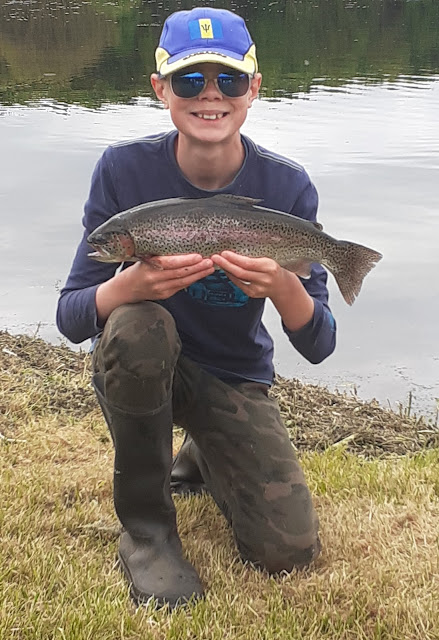 This is Willam's very first trout. He was very happy of course, as was his grandad Brian Heap, our club President who takes William fishing as often as possible.

My personal guide was Iain Scott, the club’s deputy chairman and we had a really enjoyable couple of hours talking club business while swopping fishing stories as he helped me in trying to fool a fish by tying on a thin 'tippet' of 5lb line. I was keen to catch one on a dry fly because the excitement of seeing the swirl of the take is a top adrenaline rush, but in the end we lowered our sights to a slightly sunken gold head nymph and it was only moments before a surging take tightened the line and battle commenced. 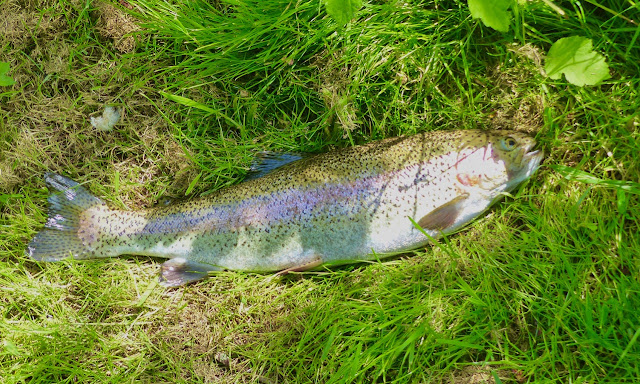 The fish put up substantial resistance and was big enough to not only provide my wife Sue and I with two substantial meals but the crystal clear water and rich fly life of the lake ensured it was very tasty. So if you want to try tasting trout, buy your club day ticket costing £20 and you’ll have hours of fun and with luck, take home two big fish and enough delicious meals for a week.
Posted by Hugh Miles at 14:30 1 comment: