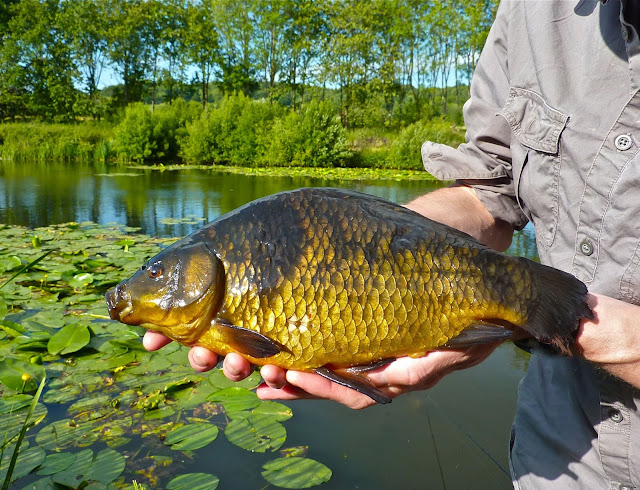 Lovely creatures aren’t they, living their lives in the quietest corners of our countryside, unassuming and discrete in both character and nature but still able to drive us anglers mad. 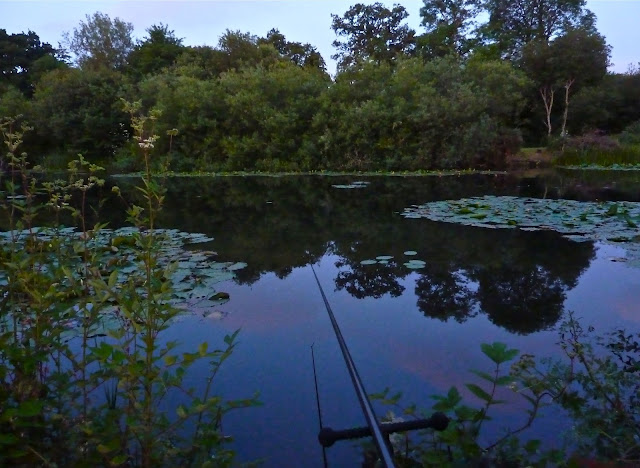 It’s become something of a tradition these past few years for me to start the season trying to fill the 16th with bars of gold. They seem the perfect creature to catch on a midsummer dawn and this year was no exception, so as the light increased from a starlit sky, my friend Chris Wild and I crept into our swims full of anticipation. Isn’t it wonderful that the same feeling of excitement and sleepless nights arises before the glorious 16th every year, even after nearly seventy years of angling adventures. There is a whole season of fishing ahead, new or familiar challenges to look forward to and a world of mystery to explore. Variety of quarry and waters is the key but there’s no harm in starting with those that are close to your heart. 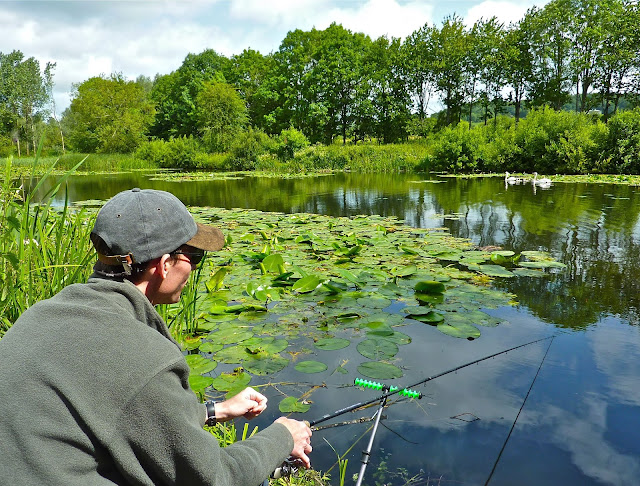 I love crucians for the conundrums that they throw up. Will they be in the swim you have chosen? Will they bite and on what bait? Will you even see the bites and if so, will you be able to strike at the right moment? These and many other questions are the essence and charm of crucian fishing and solving the riddles are where the rewards are won.

Trying to win a few bites, I had raked and lightly baited the swim the evening before, so I hoped to see tell-tale bubbles when dawn started to illuminate the pool … and my hopes were fulfilled but … there were too many bubbles and they were too big. I feared the worse, king carp, otherwise known as ‘nuisance fish’. I pulled my delicate pole rig out in fear that it would be trashed but eventually I became impatient at not being able to fish for crucians and dropped in again. 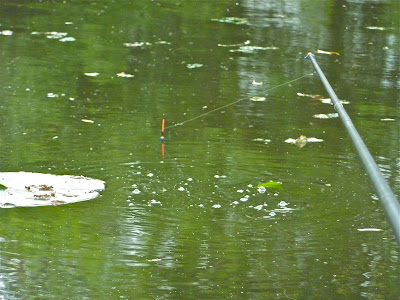 I’m guessing you have already decided the outcome and the bite when it came resulted in a violent explosion of water, an instant stretching of elastic, the nearby bed of lilies smashed and a sad goodbye to my float.

Trying to calm down, I added a little more soft pellet groundbait to the now muddy swim, picked up my slightly stronger rig and dropped in again. More bubbles rose and I hoped for a tench but an hour later the chaos resumed. What I assumed was the same carp had returned for more breakfast and it proceeded to give me a tour of all the surrounding lilies, trashing the swim in the process. It was an exciting battle and I was grateful that I’d invested in a Drennan Acolyte Margin Pole, for I was able to pull like hell without fearing it would break. It’s also armed with an elastic puller so I eventually subdued the carp’s enthusiasm for war and led it to my too small crucian landing net. 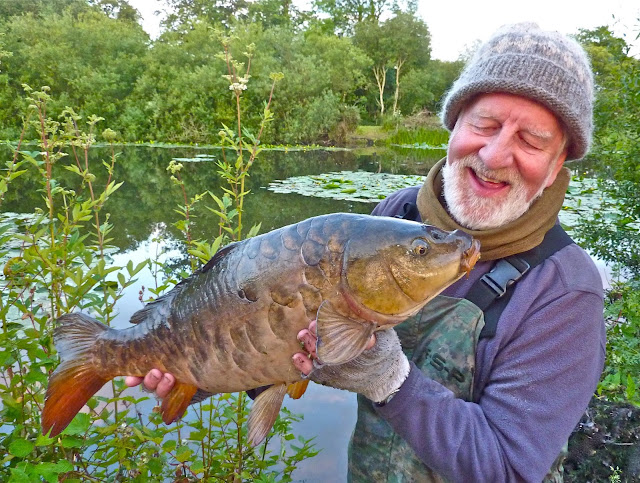 It was a splendid looking mirror carp with large scales and weighed 12lbs14ozs, not quite the peaceful start that I’d imagined but an entertaining way to celebrate the season’s opening. My swim needed an hour to recover from the wreckage before I managed a first crucian of the season, so I decided to start again, rake and bait it and wait some more. 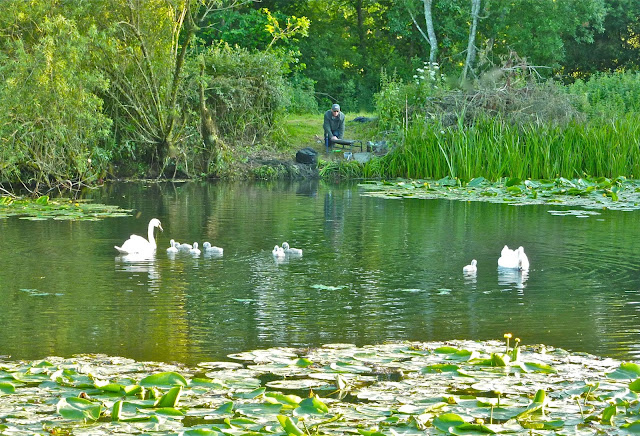 Chris was fishing in what we call the Vole Swim opposite [because that’s where they live] and had already made me jealous by catching a tench of about 3lbs – I love tench … but don’t we all … and was now busy pulling his hair out in his attempt to induce and hit the crucian bites. I had prepared his swim the night before by raking and baiting and it certainly resulted in crucians being attracted to his swim for he eventually succeeded in landing a beauty of over two pounds. 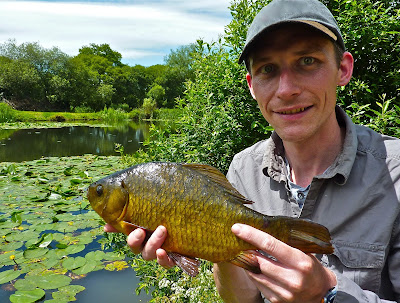 Meanwhile, my swim was recovering, bubbles rising and by the delicate lowering of soft 6mm pellets below a tiny float, I began to catch some cracking crucians. The weather warmed up and I became engrossed in seeing just how close to my feet I could attract them. After an intriguing few hours I had up to ten big crucians so close that they were alongside the bank-side vegetation in just inches of water. 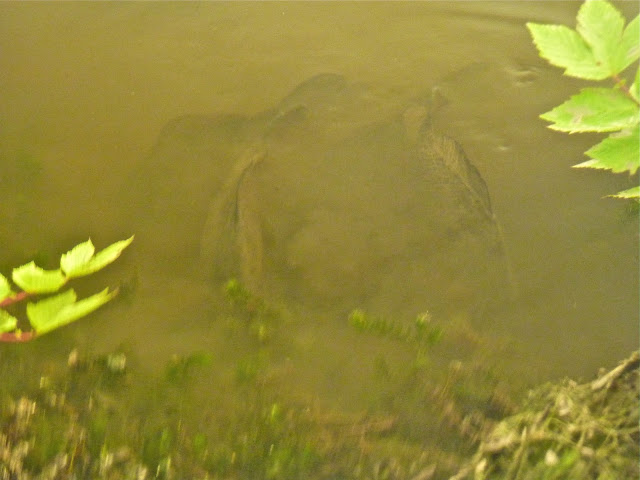 Fixing up the top two of my pole with an inch long broken top of a pole float, I freelined a pellet amongst them and tried to watch them take the bait. They had stirred up the silt but when I was able to see them make the pick up, all that happened was the slightest nod of the sliver of my indicator. They sat stationary with the bait and it’s no wonder they make us pull our hair out as most of the time the bait was surrounded by half a dozen crucians and absolutely nothing happened to indicate I had a bite … and most of the time I hadn’t! No wonder we love fishing for them, so subtle are they in their feeding … but eventually I got the hang of knowing what they were doing and ended the session with sixteen crucians to a best of 2lbs5ozs and with an average weight of 2lbs1oz. … and delightfully, most of them were tricked at my feet. 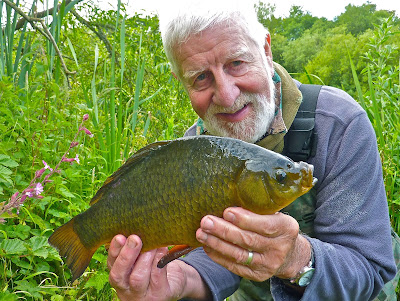 I even managed two small tench so the hours flew by and were totally rewarding, especially as Chris had caught well too, in spite of being taken apart a couple of times by carp. He ended up with about ten splendid crucians so for both of us, the day certainly proved to be a glorious 16th. 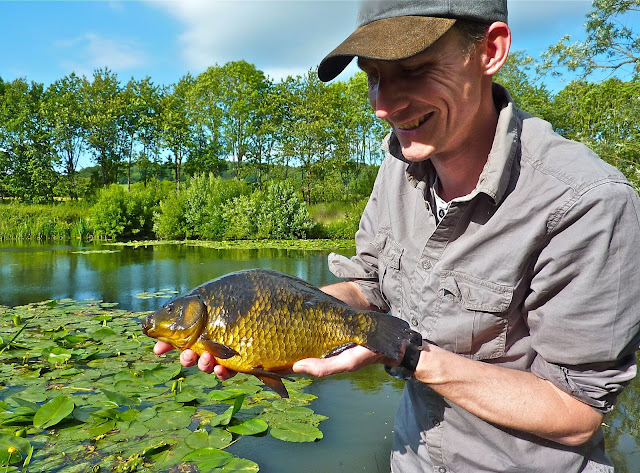