A sage once said that if you’re thinking of travelling – don’t!

If you’re looking for a vision of hell on earth that is often a reality, try travelling. Airports, queues, check ins, delays, long flights, cramped seats, no sleep, lost baggage, hours waiting for hire cars, finding accommodation in the dark, dodgy beds, poor food and all designed to empty your hard earned pot of cash. We’ve all been there and got the tea shirt.

However, most of us have also had some wonderful holidays and my wife Sue and I have certainly made some fortunate choices. They range from culture to vultures and having been a wildlife nut since childhood, birds play an important part in my life because they are so rewarding. In fact, they inspired me to become a wildlife film-maker and as a result I’ve been privileged to enjoy the company of birds all around the world. You might not be a bird-watcher and if not you are missing out, for they are 'cheap' to watch, free even and their songs, their tameness in our gardens and their travels around the globe are always fascinating.

My wife Sue enjoys them a lot too and we both love wild flowers, so when she said she’d like to visit Sicily, I jumped at the idea. But when to go and where exactly?

Sicily is a big island and with the many piles of Greek and Roman rubble that we wanted to admire, along with the glorious Baroque architecture and art, we were spoilt for choice. However, I guessed the last week of April would be good for the flora and with migration in full swing at that time, it would be perfect for birds too. But where to stay?

Armed with a coffee table groaning under the weight of brochures, we started on the needle in a haystack search but with the attractions of Syracuse, Noto, Ragusa and Modica tucked into the less developed SE quarter, it seemed like a good area to start. What’s more, a marshy area along the nearby coast looked good for migrants. Then I struck lucky, for turning the pages, there was Villa Favorita. Having ‘Google Earthed’ it, I became excited at the prospect for it looked like the perfect place for our holiday – and it was!


Fearing this is turning into a book, I’ll ignore the beautiful Villa and rooms, the kindly and faultless staff, the excellent food and wine … why can’t every country serve such tasty food … and concentrate on the estate and it’s birdlife.

The 18th century villa is set on the top of a hill close to the ocean and surrounded by citrus groves that are protected from the sea breezes by ancient olive trees, so the delightful scent of oranges and lemons wafts into our windows and pervades every waking hour.

We’re woken at dawn by the glorious fluty calls of golden orioles in the huge ficus trees that glow in the rising sun. Keen to see such exciting birds, I creep through the courtyard and garden before several minutes of neck ache reveal the bars of gold hiding in the topmost branches. It turns out they are there every day, feeding on the little fruits of these weeping figs and are a joy to behold as they are so rare back in blighty.

A leisurely stroll round the grounds before breakfast finds a diminutive, bright yellow serin singing from the hedges in the veg. plot, goldfinches in good voice above the ripening almonds, a woodchat shrike evidently nesting just below the garden and a pair of hoopoes flying over the swimming pool, one of which is carrying food for it’s chicks. What exotic looking birds they are.

Breakfast is taken on the terrace by the citrus groves, the sun already warm enough for shirtsleeves. Better still, that ubiquitous Mediterranean bird the Sardinian warbler serenades us as we gulp the juice from those famous Sicilian blood oranges.

With the air now tepid, the sky above is filled with swifts as they scythe the blue for insects. Some are bound together in flight, mating on the wing and I find myself humming that Paul Young song ‘Love is in the Air’. But it’s time for some culture now, so it’s Syracusa or maybe Noto, visible just across the valley from the swimming pool.

There’s an endless variety of interesting places to go nearby, including the very southern tip of Sicily where we look across the Med. towards the coast of sadly troubled Libya. Migrant swallows arrive as we scan the waters, survivors of their epic journey across the Sahara and the sea.

Nearer to the Villa is the wonderful Vendicari wetland reserve where we enjoy the wildflower walks among flamingos, avocets and marsh harriers.


But we never linger long. The villa and it’s clear blue pool is too tempting, so after a delicious Sicilian antipasto lunch, one portion shared is enough, we write, read, embroider, swim and paint the scenery while soaking up the sun and birding.

The delights of the pool are shared by numerous thirsty birds, so there’s never a dull moment. The design of the pool ensures there’s always shallow water at the edge and this proves a magnet to many collared doves and wood pigeons, two of the villa’s commonest birds. Serins, goldfinches and linnets love it too, along with smart Italian and tree sparrows, magpies and spotless starlings – they are spotless even before they bathe – but most amusing was the Sardinian warbler, that attractive bird with it’s charcoal grey head and blood red eye. 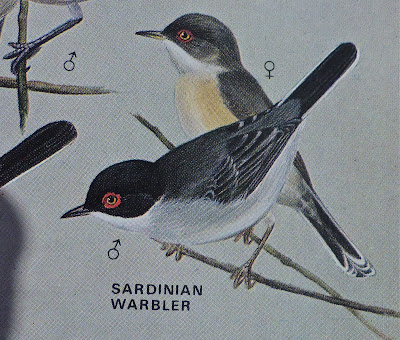 The shower had been left dripping slightly and the warbler thought this was just the ticket, sitting under it until fully soaked, then jumping up into the olive tree above and having a good shake and preen. It evidently decided it enjoyed the cool water so much that it repeated the performance several times. It was like a Disney cartoon character, feathers splayed all over the place until groomed to sartorial elegance.


Whenever out in the gardens, we were always alert to passing birds and some rarer ones were seen every day. The sky was often lit up by the flocks of bee-eaters heading for Europe, there were alpine swifts among them, hobbies too, along with specials like Eleonora’s falcon and Montagu’s harrier.

There never seemed to be a dull moment in the bird world so we’d sleep well, except when woken by the delightful pair of scops owls that hooted duets to each other in the moonlight. They sung every night, signalling the end of another perfect day in paradise.

So my verdict on whether holidays are heaven or hell. Well, if you make good choices and get lucky like we did in Sicily then they are heavenly … even if it’s always good to be back home!