All these words could be used to describe the beautiful crucian carp, a bar of gold living in a world of weed and mud, drawing us anglers magnetically to some of England’s most beautiful watery corners.

Sadly these watery corners are becoming rare and the crucian is threatened by hybridisation and extinction in many of its’ previous hiding places.

Happily, anglers love them so much that they are doing all they can to save this rare species of wildlife by creating new places for them to live and one such group is my very own Wimborne and District Angling Club.

I’ve been a member for thirty-seven years and Thursday 20th September marked one of my happiest club days ever. Driven by a need to save the crucian, members have created a new haven for them, along with happily cohabiting tench and we celebrated the opening of this new fishery on Thursday.


Restoration of this totally silted and almost dry lake was achieved entirely with volunteers from the membership, guided by our crucian guru Peter Rolfe and galvanised by our club Secretary Stu Hitchman.

The project started two years ago by asking for support from the Angling Trust, the Angling Improvement Fund and the Environment Agency and they all proved to be a tower of strength. Our landlady Julia Smith has been wonderfully supportive too.

Once the dredging and building of a new monk for drainage was complete and the lake allowed to mature, perfect baby crucians from the EA’s Culverton Fish Farm were stocked. Tench were added soon after and all have thrived in the crystal clear, rich and weedy water, fed from a small river that eventually makes it’s way to the River Stour.

Even happier news came this summer as Stu and I were carefully clearing swims and found several baby crucians hiding in the weed. So even since last December they have already bred successfully. The future is bright, the future is gold!

The opening of a new club lake for crucians needs to be celebrated so our Chairman Mike Hirsh gave the opening address to acknowledge all the help we have received from so many.

We were also fortunate that the Angling Trust’s Campaigns Manager and ex. MP Martin Salter agreed to come to celebrate the clubs' success, to open the lake and make the very first cast.

That’s where the pressure started because I believed it would be a completely damp squib of a party if he didn’t catch. It fell to me to prepare and bait several swims so that our first days fishing might be a success. Given the late season, we weren’t likely to catch a crucian but by raking and feeding the swims over several weeks, I hoped some tench might come out to play. Luckily Martin is an excellent angler and second cast he landed a beautiful, fast growing tench, fattened on the lakes many invertebrates and plenty of sweetcorn. 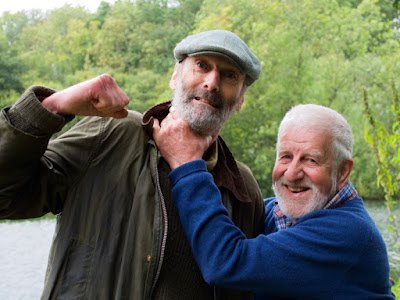 The day was a double celebration for us both because twenty five years ago “A Passion for Angling” was showing on BBC 2. It took four and a half years to complete and there were times when I felt like doing this to him and no doubt Chris felt even more like strangling me. Actually making the films was great fun … most of the time!

Appropriately our President Brian Heap and our chief digger and builder, Nick Lawrie also caught tench, so it was job done and time for champers, plus a feast provided by members’ wives, a meal that would rightly be insulted if you called it a BBQ. Brian then gave words of sincere thanks to all those who achieved so much to make the restoration a success. Didn’t they do well!

Our club is going places because they show what can be achieved by forming partnerships and working as a team. I can highly recommend membership and the large numbers of excellent waters that we have to offer … which now includes a dedicated crucian and tench lake.

It will soon be time to trot a float down the local river Stour for the increasing stocks of prime roach and I can’t wait. 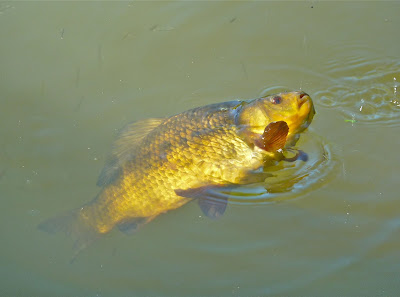 Gold in the summer, silver in the winter. What’s there not to like! 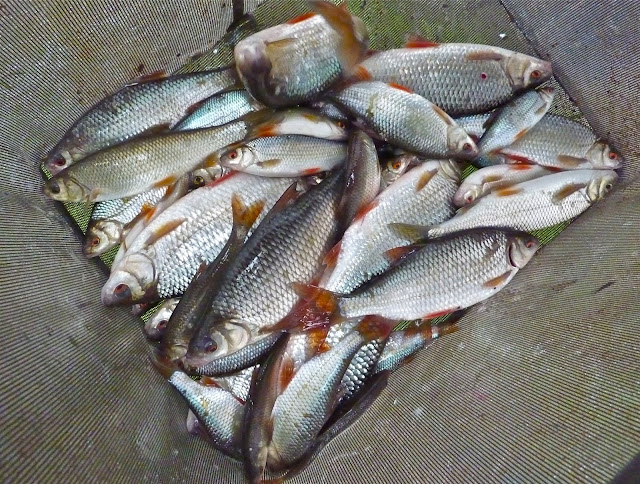 If you want to learn more, please visit our Website and Facebook pages ... www.wimborneanddistrictanglingclub.co.uk
Posted by Hugh Miles at 17:47 No comments: