We are all well aware that angling participation is falling, especially among the young and that is a concern not just for the health and well being of our freshwater environment but our youngsters too. Put simply, angling is good for us and lots of studies have proved that point time after time.

The only age group that has increased participation is us ‘oldies’ and I suspect that is because we have more time compared to those who are driven to work all the hours god sent and are determined to make as much money as possible … but why if you have no time to enjoy it? The young have many distractions, not least that of social media … and a fear by their parents of letting them into the great outdoors doesn’t help. So you might ask, what can we do to help?

Firstly, we should applaud the recent increase in the depiction of angling on TV instead of knocking it. ‘A Passion for Angling’ was first shown on BBC2 in 1993 to critical acclaim but there has been very little on the mainstream channels since, maybe because they showed Passion five times before they felt it had run it’s course. It would be interesting to repeat it again now and see if it is as successful as it was more than twenty years ago. One memorable note from a viewer to the BBC after the first programme simply said :

“I’m not an angler,
I don’t even like angling
but I’m hooked”

The BBC Natural History Unit tried to ‘out-do’ Passion in the late 90’s with their series ‘Tales from the River Bank’ [and I know that to be a fact because the producer is a fisherman and friend and told me so] but sadly it slid under the radar, the most memorable sequence being Chris Yates blowing a bait-boat out of the water with a twelve bore! I’d love to see that again …

Now we have the BBC Natural History Unit’s admirable ‘Earth’s Wildest Waters’ and I’ll pin my flag to the mast immediately by saying I’m enjoying it and so is my wife Sue … and I bet we’re not alone. Yes, I wish it wasn’t in the ‘bake off’ style [why can’t the BBC come up with some new ideas for story telling?!] … and wish it had a better balance of guys and gals [and we’ve lost one lady already] but the guests are good value and Ben Fogle and Matt Hayes are good too, though I’d like to hear more from Matt. Maybe the tackle diagrams could have been demonstrated live by Matt instead of the clunky graphics? We could have heard more from the local guides too, especially from Valgerdur Arnadottir, that beautiful fly-fishing lady from Iceland. Those big trout were gorgeous too!

The locations have been ‘interesting’ and the fishing challenging and whatever you think of the series, the BBC should be applauded for spending a lot of money on trying to show angling in an interesting way … and the shows sure are expensive, for keeping five cameramen and a back up crew out there in remote locations, along with presenters and eight competitors costs a lot of dollars. I’m glad I wasn’t paying for it all.

In 1991 ‘Passion’ took over four years to complete and cost £440,000+ for six one hour programmes and they are all in the UK with only two anglers and a crew of one, yours truly. I am of course aware that comparisons are being made between this new series and our long ago effort, even to the point where Anglers Mail’s Steve Collette wrote “If one more person says to me that this show is no ‘Passion for Angling’  I’ll throw them in!”

It’s very complimentary to think that so many still consider ‘Passion’ to be the series against which to judge all others but suffice to say that every programme is simply different and should be enjoyed for what it is. Television has changed a lot in twenty odd years and that could account for the fact that Passion attracted audiences of up to 6.3 million and this new series only a little over one million but just be grateful it’s on and keep watching. You never know, they might make another series and next time it might be better.

What’s more, with ITV’s more modern ‘in your face’ presentation on angling, these two series might encourage more folk to go fishing … and selling more EA licences will benefit all our freshwater wildlife, including our fish. So get out there and enjoy, even if it is raining. With the rivers rising at last, it must be barbel time … 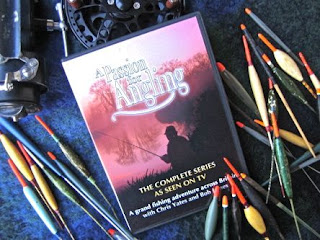 If you want to buy the series, ‘A Passion for Angling’ we still sell the DVD’s from our cottage in Dorset and Sue sends them out virtually every day … if she isn’t out buying shoes! … so please ensure that you get your orders into us so that we can get them in the post in time for the festivities. Please visit our website for details … http://www.passionforangling.info/ 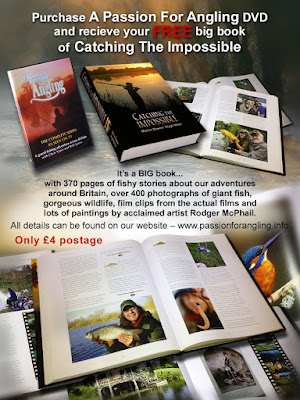 We are also offering the book of the series Martin Bowler, Bernard Cribbins and I made for Ch4 called ‘Catching the Impossible’. It’s a big book, 400+ pages and 400+ photos along with Rodger McPhail art work and it’s free … just send us £4 to cover the postage. It’s a really lovely book … but I would say that wouldn’t I! 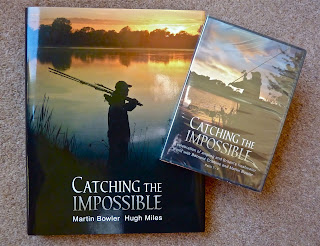 There's a DVD of the nine programme series too in sets of three, available from www.calmproductions.com
... and this is our website : ttp://www.catchingtheimpossible.info/index.html

Some anglers have suggested that they prefer ‘Catching’ to ‘Passion’ but that’s another story and like I say, they are all different and to be enjoyed without prejudice or pointless comparisons …

And if you want to read more about Martin’s life as a professional angler, then his book ‘Totally Immersed’ is a splendid read …
www.martinbowler.co.uk

… and if you’re not convinced that there is fishing just as exciting as in ‘Earth’s Wildest Waters’ if not more so  and close to home too, then read his book. What’s more, Martin has just caught a giant blue fin tuna of over 450lbs not far off the Irish coast, so I say to the BBC, have some courage and get out there. With our local ‘Big Fish’ you’ll blow the public’s imagination wide apart.
Posted by Hugh Miles at 12:55