ANGLING ADVENTURES IN THE SUN - TENCH 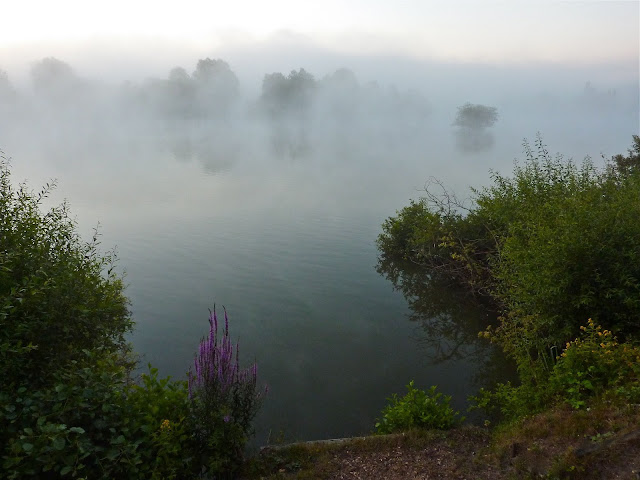 It’s difficult to imagine anything more enjoyable than a misty dawn beside a tench lake with the promise of hot sunshine to follow and thankfully we’ve had plenty of those to melt ourselves in this summer.

I didn’t have time to continue my annual quest for a double figure tench so I satisfied myself with ‘average’ tench from a beautiful gravel pit not far from home. It’s a peaceful spot, principally a carp lake but with plenty of red-eyes to savour and with the carp sulking in the heat and seemingly impossible to catch, I had this large lake to myself. No bivvy-peg bashing, crashing spods or too loud bite alarms ringing out – bliss.

Even if the carp weren’t feeding, the tench certainly were. I only blanked once in four sessions and that was only because I got smashed by one while float fishing by the lilies and then done in by a carp that certainly was. In fact, I often saw lots of signs of carp leaping and bubbling so felt the carp boys were missing out. They were not alone, for when checking through my diary I was surprised to find I'd only been four times - what kept me away?

On one memorable session I landed eleven tench, including several fives and a few sixes, so that day was certainly memorable, even if some might sniff at the average size. In my book, I’m so fond of them that any tench is a good one and really small ones are as cute as fish get.

Like almost every angler, I would love to catch a tench over ten pounds but am stuck on 8lb 9ozs and unbelievably, that weight has been repeated on five different waters! So, if you’re reading this and want to invite me to join you on a BIG tench water, then please go ahead!

Although I always prefer to fish with a float, on this occasion I decided to try this ‘new’ technique called ‘Method Feeder’! Yes, OK, I’m behind the times but also proud to be a traditionalist. So having read plenty about it in the angling ‘comics’ as my wife Sue rudely calls them, I reckoned I knew enough to make a success of it. So, as instructed, I cast frequently for the first hour and avoided the noisy kersplosh of my spomb.

As match anglers do, I had two swims on the go, widely separated to attract different fish and avoid what seem like the inevitable tangles when fishing two rods. I fished both at 39 yards only because they are my lucky numbers! Yes, sad I know but …

Much to my delight, it worked a treat and before long my buzzers went into melt down and the first tench was nestling in the landing net. Several more followed and even if I don’t think bolt-rigging is particularly sporting, it’s certainly effective.

One advantage it has of which I do approve is that it gives you more time to enjoy the waterside scenery and watch the wildlife, just as important as catching fish for a nature nut like me.

On a couple of days I was joined by friend Chris Wild and being as keen as I on float fishing, suggested he try a shallow, weedy lagoon beloved of tench. Having raked his swim and baited up, it soon became a jacuzzi of bubbles from feeding fish but turning those signs into tench on the bank proved difficult.

Reverting to small baits wasn’t an option because of the shoals of ravenous rudd. I’m sure Mr Bowler would have cracked the problem in no time but in the end Chris gave up with the float, cast out a boilie armed method feeder and by the evening had landed three tench, including his PB.

He was chuffed and equally so when he joined me on another day and beat his PB by a few inches on only his third cast … on the method feeder again of course. The tench looked like a seven pounder but weighed less than his true PB, though what a cracking fish.

I too tried the weedy lagoon one evening and having raked the chosen swim and added a few broken boilies, the water surface was soon covered by tench bubbles.


Initially I couldn't turn these bubbles into bites but adjusting the placing of the shot to create a more sensitive rig, I enjoyed a classic lift bite, the float rising slowly before sliding below the surface. A gentle strike resulted in a battle in the weed but eventually I teased the tench out and into the net.


I thought I'd cracked it and expected more to follow. The tench had other ideas and simply blew bubbles of derision into my face until dusk closed around us to end a splendid day in the countryside.

Interspersing my tenching were several trips to Christchurch Harbour for a serious dose of mullet madness … and when you catch the fever that goes with trying to fool these wonderful fish, it’s difficult to stop … but that’s a story for another time.