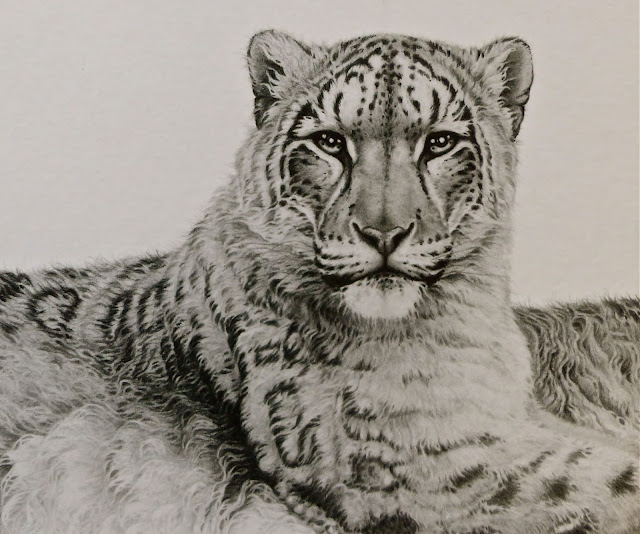 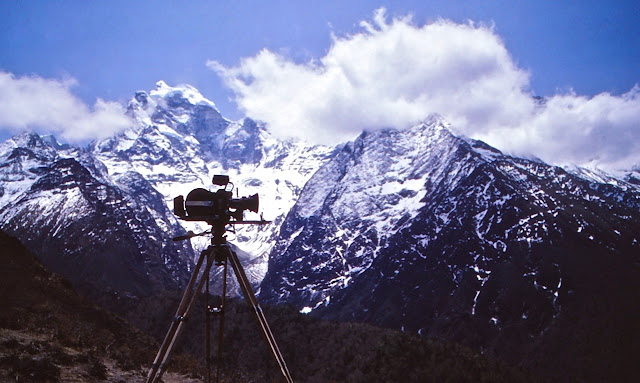 “Some parts of our planet are so brutal that any animal surviving here acquires an almost mythical status.

This is the greatest mountain range in the world - the highest, the toughest, the most hostile - the Himalaya. Towering above India’s northern borders, these remote mountains are home to what may be the most glamorous animal on earth.

Just to see one is a dream, to film one nigh impossible - this ghost like creature is the Holy Grail - the ultimate wildlife challenge - the snow leopard”.

Those above are the opening words of narration for my film on this legendary cat, the first ever attempt at making a film about them. I have always loved cats and having made films about lions, leopards, tigers and mountain lions I had to try an even greater challenge. However, having read lots of scientific research and books, I was in no doubt about just how difficult it was going to be. 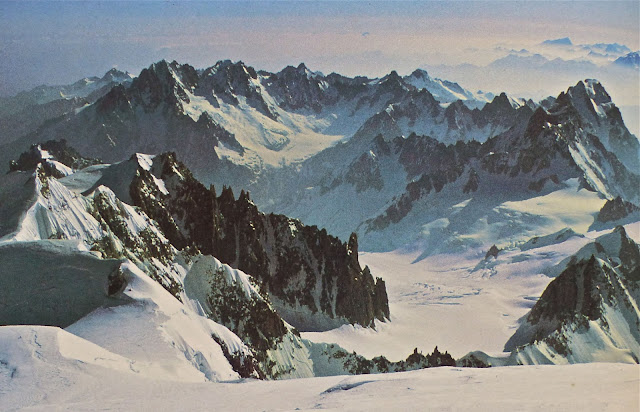 Recognised by many as the world’s pre-eminent field biologist, George Schaller described the mountains in which snow leopards live as “a land of just enough” and that refers not just to the animals but the human inhabitants too. 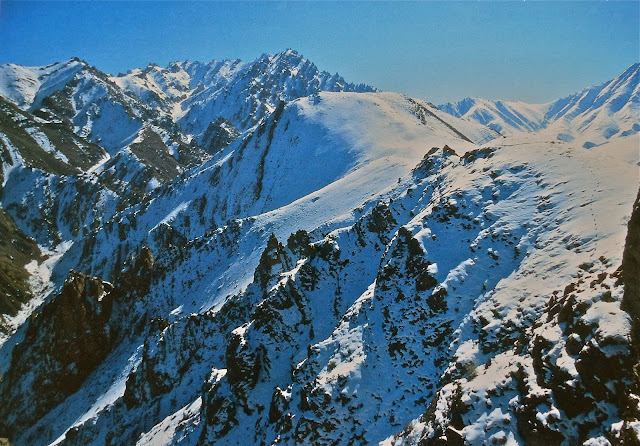 The tracks of a snow leopard can be seen on the right of this photo and shows just how difficult it was to follow them with camera gear. 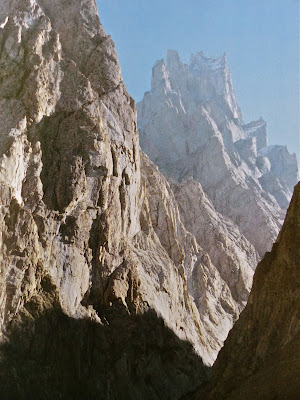 Like many mountain adventures, our quest was to end in tears and triumph and for one of us, the dream became a nightmare, his determination driving him close to death, no surprise I guess when trying to conquer this Everest of the natural world.

Ex Australian marine Mitchell Kelly was my main cameraman and in the first couple of years he achieved great success. For instance, snow leopards had never been seen mating, let alone filmed but Mitchell rose to the challenge and succeeded, along with many other firsts. We also managed to film a lot of intimate scenes and got to know how and where they moved around in their precipitous terrain.

However, he had to be evacuated from the mountains three times, once for torn stomach muscles from carrying heavy camera equipment up steep mountain sides, then more seriously, from altitude sickness twice, the last time nearly killing him. It was an immense relief that he survived but from then on the film became a damage limitation exercise. 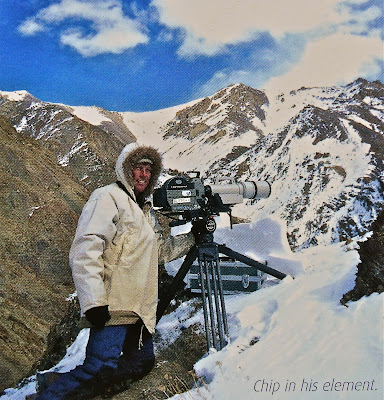 We had already suffered tragedy when my original colleague and close friend on the quest, Chip Houseman was killed in a Thai Airlines crash just days before we were due to start filming. We had made an Academy Award winning film together on tigers in India and it was during the filming that we hatched a plan to tackle this unconquered challenge.

This is not going to be a story of how we made the film, even if we did manage to complete a film about these beautiful cats and learn a lot about how they lived in the unforgiving Himalayas of Ladakh in NW India. 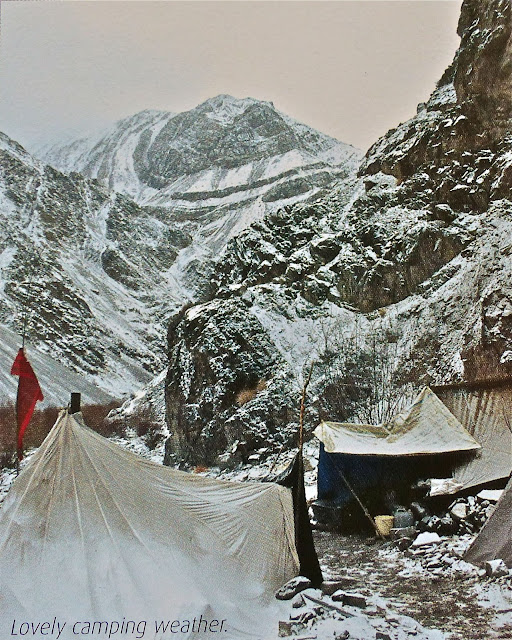 I would lay awake at night, not because I couldn’t sleep in a tent with a broken zip in minus twenty temperatures but because it was the best time to hear the mating calls of the cats. Their high pitched screams would carry a long way through the valleys and give us an idea of where they were located and interestingly, those descriptions by mountaineers thinking they were hearing the yeti calling in the night were actually snow leopards!

I met an English school teacher in Bhutan who described seeing a yeti in a snowstorm on a high pass. It stood by the road edge looking at him, similar to a large grey langur monkey but more like human size, then shuffled off into the trees. When you consider that Bhutan is covered by 60% of dense forest and bamboo and impenetrable, it is easy to hide a large primate from prying human eyes. So yeti’s do exist!

That’s a story for another time, so back to snow leopards and our struggles to film them and though our story only scratched the surface, the film was shown on prime time ITV and around the world to big audiences. However, our main achievement was to prove to the wildlife film-making world that snow leopards could indeed be filmed and like my previous story about pumas in the Andes of Patagonia, several film crews followed. 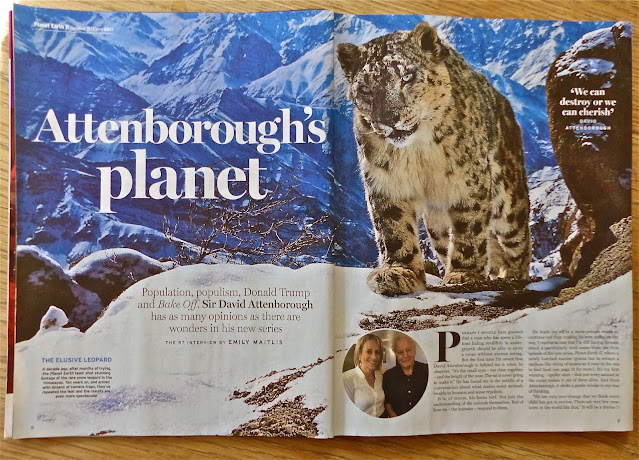 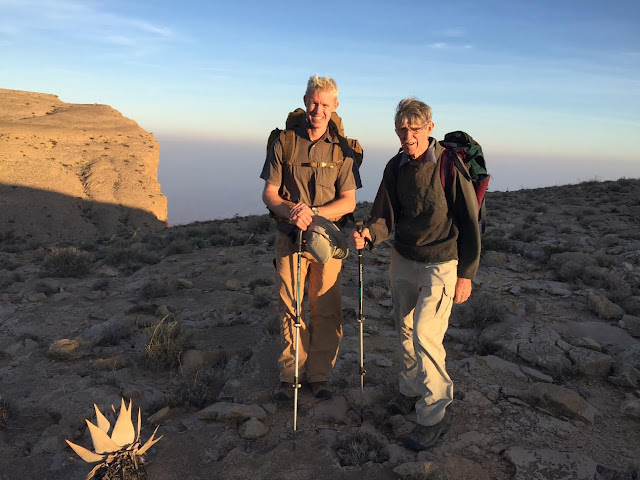 Most notable was cameraman Mateo Willis, the son of a great friend, David Willis who took the wonderful Radio Times pic. I was able to help Mateo a bit on location details etc. and he and his colleagues from the BBC filmed some amazing behaviour for David Attenborough’s series ‘Planet Earth 2’ and if you saw it, you would never forget. The images of three snow leopards and their violent behaviour as a mother defended her cub from an aggressive male were magical.

The result of all this filming success in our chosen valleys in Ladakh is the direct way it has saved snow leopards from persecution, for just as with my pumas, tourists want to see the mythical cats. The local people are as delightful as humans get and were extraordinarily helpful during our filming and they have since become the perfect hosts for tourists seeking snow leopards. 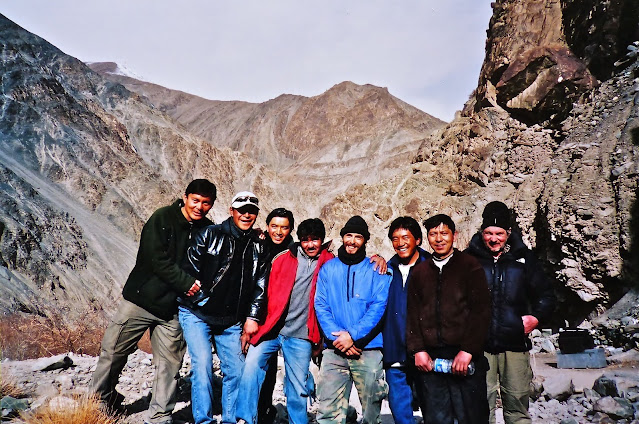 This is our terrific team of Ladakhi helpers who were wonderful companions, some of whome are guiding tourists up there right now. The high ridge above them was a favourite patrol route for snow leopards in the evenings - sometimes!

Attracting tourists was the brain child of the world’s leading snow leopard scientist, Rodney Jackson [who is on the right of our happy snap] and who took this picture of our star cat with his remote cameras. He rightly argued that if the wildlife was worth lots of dollars to the rural economy, they would be looked after by the locals instead of persecuted for killing their sheep and goats. So he encouraged the locals to set up ‘home stays’ for tourists in the tiny mountain villages near the main travel corridors of the cats. 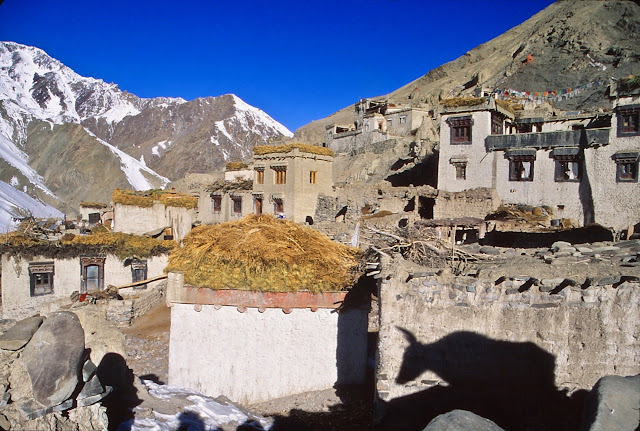 One entertaining story from the village which I'm assured is true is of a young girl who took out the family's sheep and goat herd for their daily feed int the hills. It wasn't long before a snow leopard rushed out of the mountain side and grabbed a sheep and the girl, instead of running away, rushed forward and grabbed the other end of her sheep. A tug of war followed and eventually the snow leopard let go and slunk away into the mountains. One sheep saved by a young girls bravery!

My friend Mateo Willis who filmed the wonderful snow leopard behaviour for Attenborough’s ‘Planet Earth’ close to this village told me recently that the remote mountains where we filmed in the ’90’s have now become a honey pot for wildlife seeking visitors from abroad and the valleys are full of tents and telescopes. 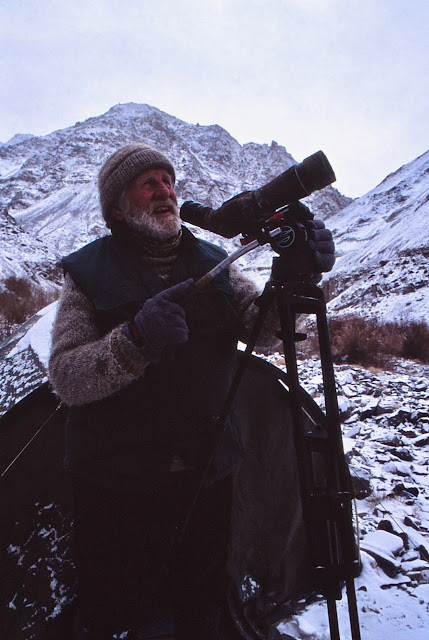 He also said that the cats have become more tolerant of humans, just as our pumas did in the Andes Mountains and this has now made them easier to see. So it's a win win result all round.

Given the recent skirmishes between the Indian and Chinese armies on the Ladakhi border nearby, this tourist hot spot wouldn’t be a healthy place to be right now, but we are praying that all the snow leopards survive and flourish as they have done these last few years.

Our films legacy was a small contribution to start the ball rolling in environmental tourism in our chosen patch but you could argue that the peace and tranquility of the area has been spoilt. Maybe George Schaller would think that ‘the land of just enough’ has become ‘a land of too much’, but a lot of wildlife has been flourishing, including the rare and endangered snow leopard and this in turn has allowed many folk to enjoy seeing this mythical creature for the first time.

Given the increasing climate crisis makes me wonder if an increase in wildlife tourism is such a good idea but that’s a debate for another time. However, it’s a likely truth that if wildlife isn’t worth money it’s unlikely to survive and for better or worse, that’s a contribution that television has made a reality.

The wonderful drawings of snow leopards are by that leading artist Gary Hodges, so thank you for sending them to me Gary.