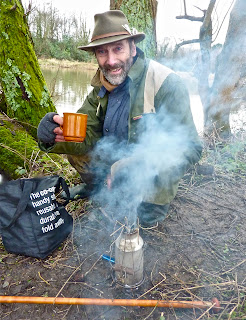 It’s always a pleasure going fishing with my pal Chris because, despite what the conditions tell us, we are forever optimistic of a result … yes I know, ‘a worm on one end and a fool on the other’ … but last weekend we just had to get out. I’d been indoors editing some film and Chris locked in, writing his book for Collins on winter. We were both suffering from ‘cabin fever’ and needed to come up for air. Perch are now Chris’s favourite winter species and I find them easier to catch than big roach, so perch were our chosen quarry.

An afternoons fishing would take place on Dorset’s River Stour near our homes and the conditions were ‘challenging’, a rising river full of snow melt and salt washed off the roads. Water temp. was forty two degrees – not bad – but a full moon and bright sun didn’t help. At least we had a good selection of excuses ; we sometimes need lots of those! 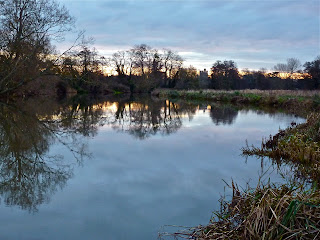 Our two previous visits to the river had indeed ended in blanks, despite near perfect conditions. I had fished for both roach and perch on both sides of the river and never had a bite, though remarkably, fish rolling roach like in my swim turned out to be jack pike, cleaning their gills I suspect after feeding on the liquidised bread I was throwing in. No, they weren’t feeding on minnows, there were non there. 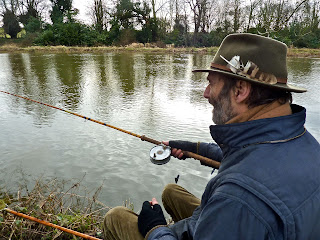 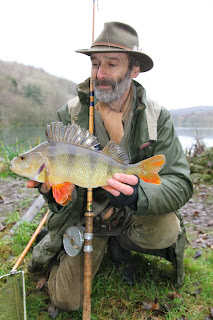 Chris did get one chance on each day, hooking a large perch, the first of which broke him on a snag, the second slipped the hook after a spirited fight, though just to prove he does occasionally catch perch, here’s ‘one he prepared earlier’, a two pounder but from a lake. The highlight of these attempts was an otter swimming downstream at dusk, so close to Chris that he could have tapped it on the head with his rod. 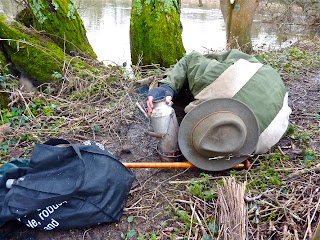 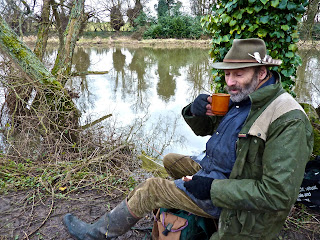 In the same spot last weekend, while brewing a refreshing  cup of Kelly Kettle tea I was asking Chris how to spell the Latin for ‘there’s always a chance’ … ‘casus ubique valet’ … and we fervently believed there was a chance, if only during the last hour of daylight. I had already tried two classic swims before Chris arrived, dangling an enticing lobworm below a Cralusso flat float with my pole, deep under the tangled branches of overhanging bushes. 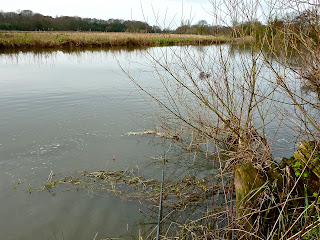 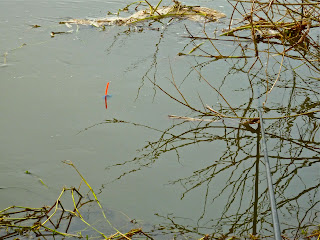 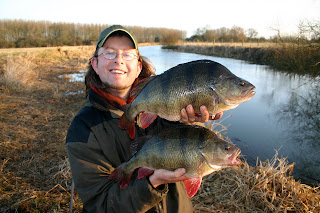 Martin bowler and I had used the same technique during the filming of  “Catching the Impossible”, the result - perch of 4/6 and 5/4. We were told by Angling Times that, at the time the ‘impossible’ five was the largest ever taken from a river … since beaten of course, but when the monster swirled and gave us our first glimpse we couldn’t believe what we were seeing. So the technique is deadly, though not last Saturday, not even a hint of a bite. I did get a new species though, a wren perching on the pole, adding to previous ‘perchers’, robin, grey wagtail and several kingfishers, one of which fell off! 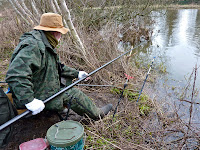 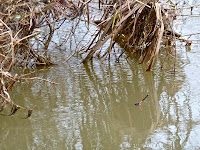 I moved down to join Chris among some ancient, overhanging willows and tried the worm dangling trick again but still no bites, not even an enquiry. 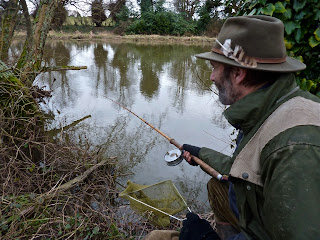 However, while trying to photograph Chris’s float I failed because it had been pulled under by … a well timed strike and nothing. Hook gone. His favourite float sank again during the magic hour. Surely this time it was a perch but again the hook was bitten off. Obviously a hungry jack pike. We caught nothing – nada – zilch.


When dusk had rendered our floats invisible the highlight of the day ghosted into view, a barn owl hunting over rough pasture on the opposite side of the river. Unremarkable perhaps, though it was the first time we had ever seen a barn owl along this stretch of river in over thirty years of fishing. It made our day. 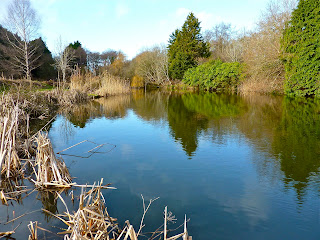 Desperate to even see a bite, I headed off to Sway Lakes early next day and promptly caught a 2/3 roach on my second cast, taken on a paternostered tail of a lob. It was all perch after that, twenty or so up to 1/12, mostly on float-fished maggot. My desire to see a bite was more than satisfied and catching a beautiful big roach like that on a cold day was such a pleasant surprise that it sums up the appeal of angling. It proves that there is always a chance.

In the good old days you could catch a brace like this, my biggest roach from the stretch in Wimborne of 2/9 and a perch of 2/3, a picture taken by Chris on one of our  perching sessions. [It’s horrible quality because a mag. lost the original and this is taken off the pages of the article by Chris.] It’s really sad that so many of the fish have ‘disappeared’, our local fishery destroyed and the local tackle shop gone.


Why the fishing has been so bad on our local rivers recently is a complex issue which I’ll enlarge on in a future post. The stretch that Chris and I had blanked on was once one of the most famous fisheries for big roach in the country, perch too, but  in the last twenty years we’ve suffered the raids of thousands of cormorants from the continent and more recently, other ‘colonists’ from Europe who choose to eat their catch! When with Chris last Saturday, I found the freshly constructed anchor for fixed lines hidden in one of our favourite perch holes.

It’s easy to feel powerless in the face of these dramatic declines in our fish stocks but one thing you can do is join the Angling Trust. They are really getting to grips with the issues of the day and becoming a political force in the corridors of power, so please join. It costs very little - just a couple of bags of boillies – and the Trust is already achieving a lot and could do so much more if every angler supported it. So just join – you know it makes sense! 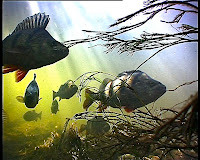 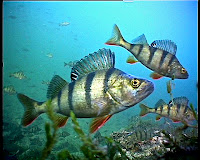 http://www.anglingtrust.net/    - and read what they’ve achieved already.
Posted by Hugh Miles at 10:21