What very sad news, the loss of such an inspiring, gentle and kind man - and like many of us no doubt, I find it difficult to believe that he isn't still out there on the river, waiting to pull off yet another awesome conjuring trick.

We all know that Terry  was a great angler but more than that, he was simply a lovely bloke, always full of fun even when he had his sights firmly set on a giant fish.


I was very fortunate to share experiences and favourite swims with Terry in the good old days when we were pursuing 3lb roach on the River Stour at Whitemill Bridge. He was always generous with his stories and optimistic about the prospects, even after we had both blanked, a familiar occurrence when hunting those elusive monsters … though of course, he blanked a lot less often than I did!

Virtually the only other angler I saw in those rock hard days was his very close friend Tim Norman, so I always felt honoured to be sharing the same challenges as these two wonderful blokes. Do read Terry's descriptions of those inspiring winter days on the Stour in his book ‘First Casts’ – as good a book on fishing as you are ever likely to read.

Terry paid Martin Bowler and I the honour of agreeing to help us with the filming of ‘Catching the Impossible’. We set him the challenge of catching a seven pound chub … certainly not ‘impossible’ for a man of his 'kaliber'!  After all, he had already caught so many he had lost count … and that is not a suggestion that he ever showed a hint of false modesty. He was just good at it!

But catching a seven pounder to order with the camera clunking about on the bank, well that is just a little more difficult. We enjoyed many happy hours together trying to hit the target and these even turned into days … but in the end of course his legendary perseverance paid off … as can be seen in the film clip from the series.

Then we did set him an impossible task, a three pound roach but from a river! Martin and I considered this to be the only truly impossible target in the series, the title just being a device to help us tell the story. Tim and Terry even doubted there were still any three pound roach left alive in the River Stour, let alone being able to catch one but they generously gave it a go and needless to say, Terry turned our dream into reality. It was one of the happiest moments in angling that you could ever imagine.
No doubt I’m not alone in thinking that everyone who ever met Terry will miss him deeply. What a lovely man. 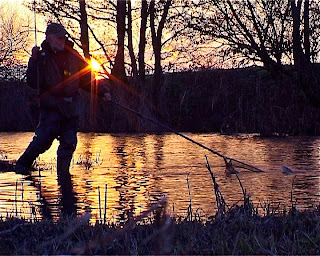 We hope you’ll enjoy watching Terry doing what he did best - catching monsters. He’s probably still out there in a favourite swim, catching even bigger ones!
Posted by Hugh Miles at 10:33