A PASSION FOR ANGLING - AUTUMN GLORY 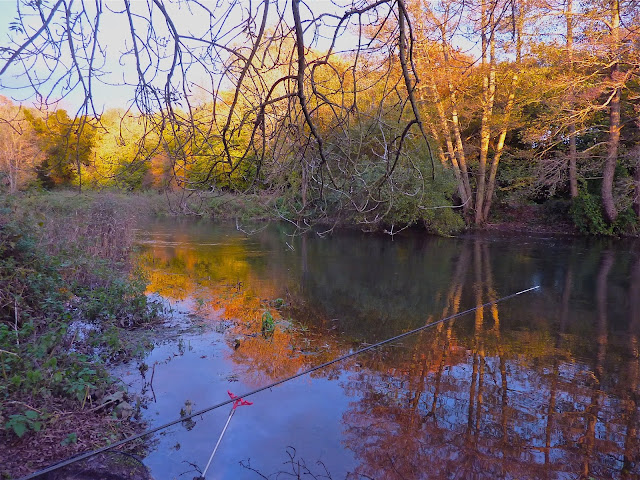 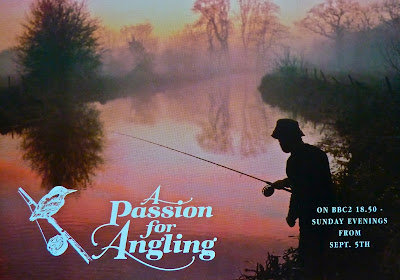 A fishing series showing at a peak viewing time on BBC2 has to appeal to the widest possible audience. It also has to appeal to what we hoped would be our main audience - anglers, so catching sizeable fish was the challenge for our star anglers, Bob James and Chris Yates and this had to include a two pound roach. 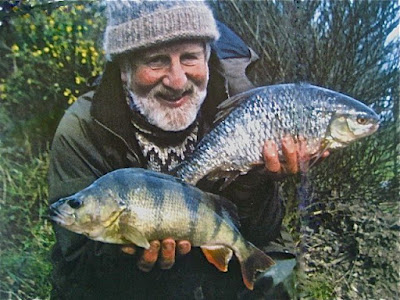 I have loved roach fishing since childhood, catching a good 'un from the Great Ouse at Ely when at school and suitably intoxicated by roach, have gone on to catch hundreds of two pounders from around the country.
More than a few of these two pounders have come from still waters and as my good friend and river keeper at the famous Britford Fishery on the lovely Hampshire Avon Stuart Wilson says 'they only count half and I have to agree'!

A river two and especially a three pounder are the true monsters of the freshwater world ... this roach weighed only 1lb11ozs, just in case you were wondering. I couldn't catch him a two for this happy snap - must try harder! 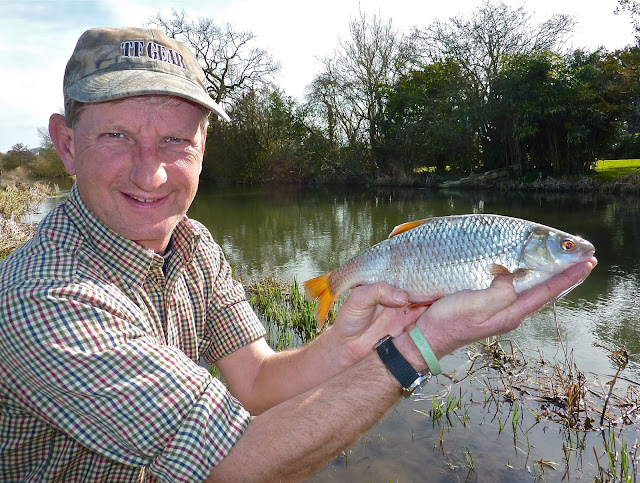 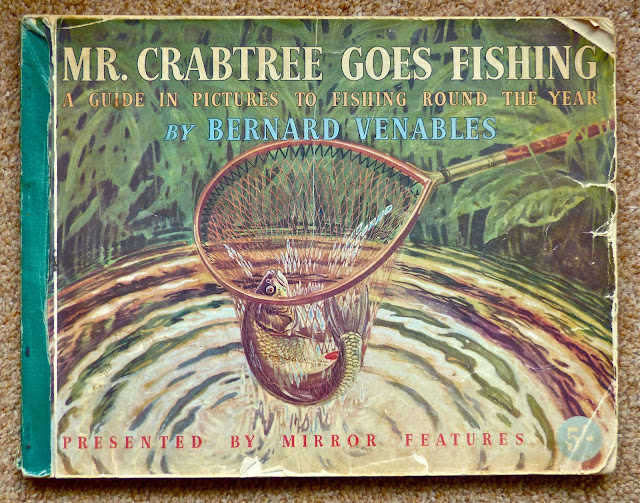 Like many of my generation, I had been inspired as a child by Bernard Venables and his creation, 'Mr Crabtree Goes Fishing', so we were very keen to include Bernard in our film.
Autumn perch fishing seemed the perfect subject. 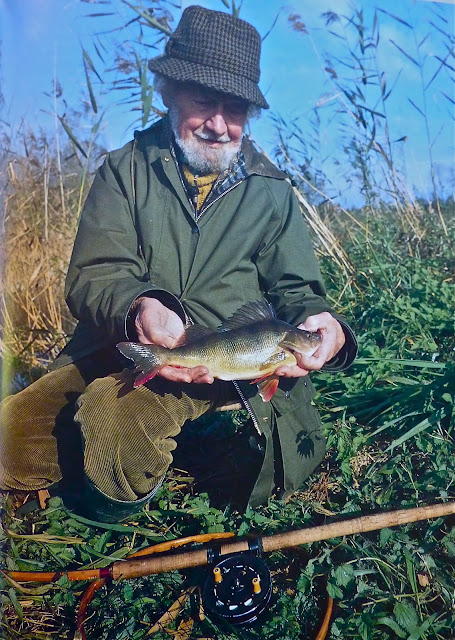 How could anyone forget Bernard's wonderful painting of a shoal of perch attacking minnows. 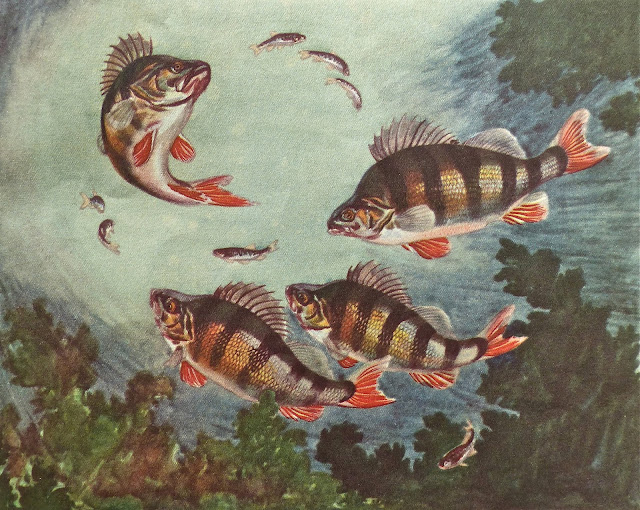 Filming with Bernard was one of the highlights of my fishing life - catching big roach has been another. 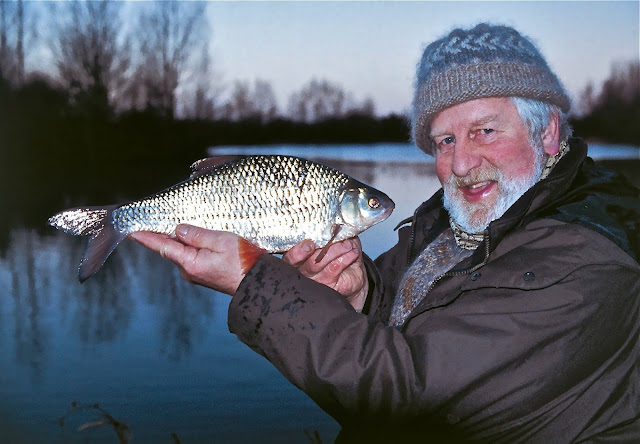 I've been lucky enough to catch eight three pounders - so far! - to a best of 3lb11ozs and one of these was from the Hampshire Avon, so our quest for a two pounder in our autumn programme was right up my street. It felt like I’d spent half of my life trotting its' crystal waters and this was to be our location for this episode of our six part series. 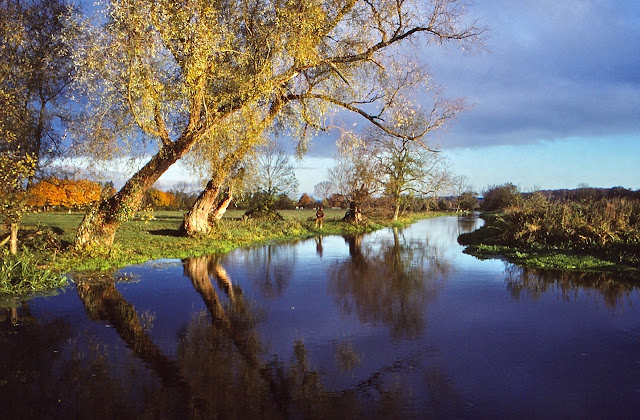 Luckily Bob, Chris and I lived close to its’ banks and were members of the Longford Fishery below Salisbury, so we knew where and how to catch big roach, or so we thought, but after a week all we had to show for our efforts were too small. 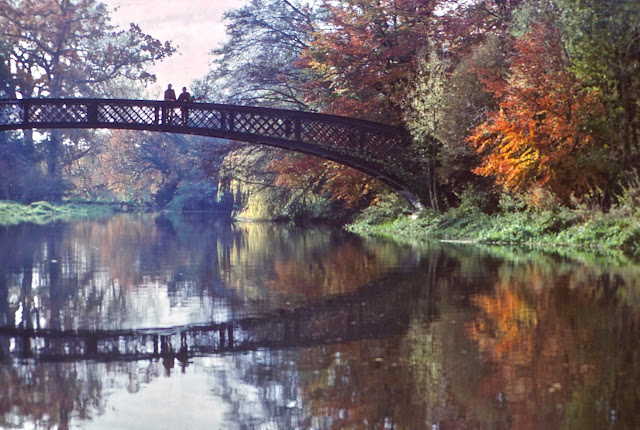 As all roach anglers know, roach have a habit of rolling on the surface at dawn and dusk and in spite of a week of failure I was still on the bridge at Longford Castle before dawn, looking for signs on this hallowed stretch of water.

Just as the light increased slightly I thought I saw a slight furl in the main flow upstream and suspected a big roach so without waiting for a second invite, I grabbed a rod and cast into the spot with a large lump of breadflake. The line had hardly settled before it tapped, then pulled tight and several solid thumps told me we had at last found the big roach shoal. That fish weighed 2lb6ozs and on the next cast I landed one of a bit over 2lbs10ozs, then two more two's.

I had slipped these fish back while starting to think about not calling Bob and Chris and carrying on compiling my greatest ever catch of big roach but duty prevailed, the lads were summoned and Bob went on to make a historic catch of ten two pounders, the best an ounce short of the even more magical three pounds. 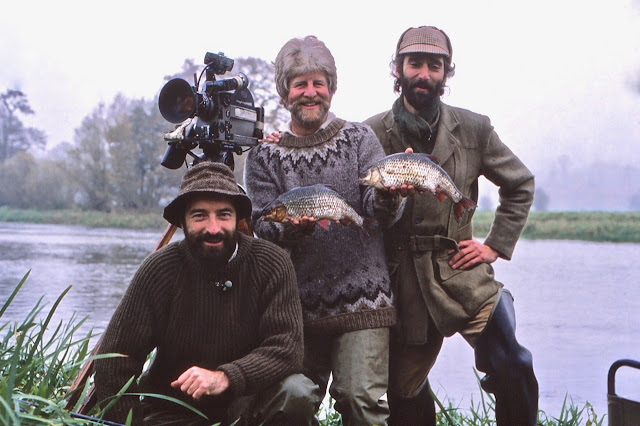 It was a perfect overcast day and the roach simply wouldn’t stop biting, even when Chris and I punted out over the shoal to get shots of Bob casting towards us. Chris held the boat in position in the shallow swim by sticking an oar in the gravel and when I asked Bob to cast closer to the camera he couldn’t because he had hooked yet another big roach from right under the boat.

It was just one of those days when dreams come true and even when we had finished filming, I couldn’t get back in my swim as Chris grabbed a rod and promptly caught his biggest roach for twenty five years. At two pounds five ounces we were all very happy, so we retired to the pub for a pint to celebrate a days fishing for the history books. 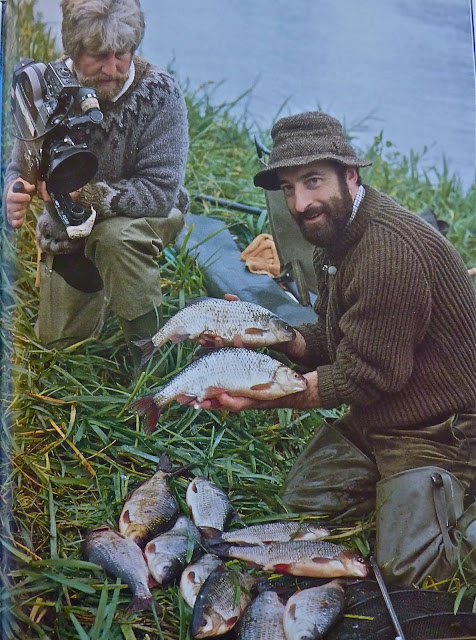 We had to catch a big Avon barbel too of course and Chris lost a monster on our first evening of trying. Upstream of his swim was the hot spot under an oak tree and it seemed only fair that this should be competed for, so instead of a coin toss, arm wrestling or tiddlywinks, Chris and Bob chose a conker fight as illustrated by Rodger McPhail. And what a privilege it was for us when he agreed to add his wonderful works of art to our book. 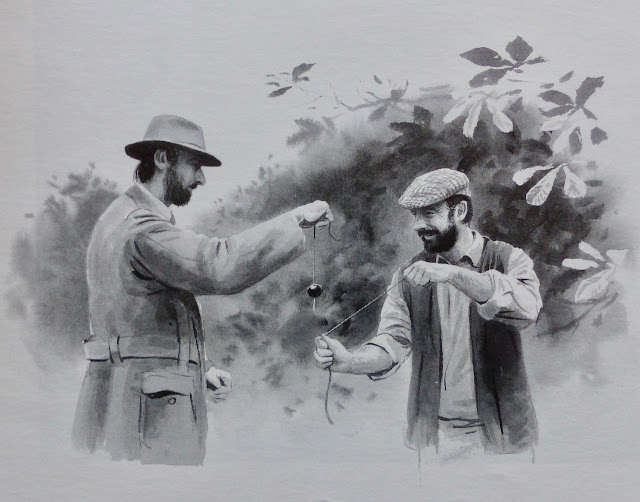 Bob won the contest and did splendidly by also winning his
fight with a superb barbel of 11lb13oz. caught from this book cover spot ... I know that isn't big by today's standards but it was twenty years ago. 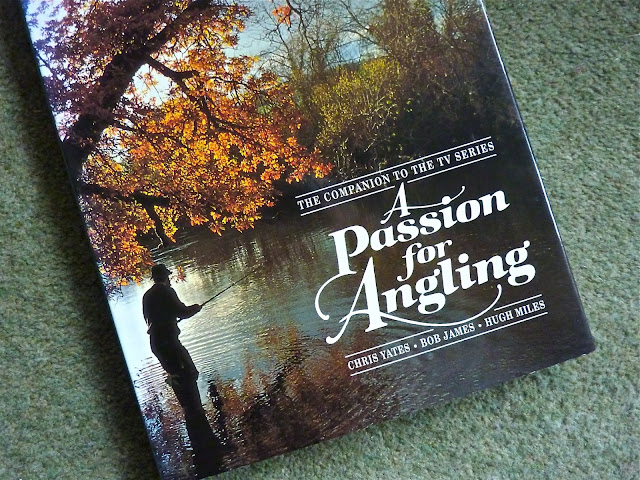 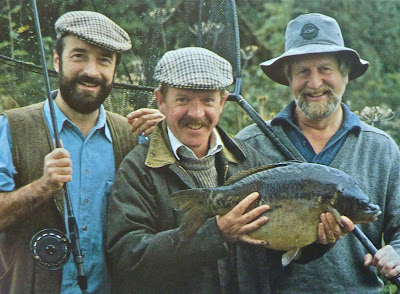 We had invited our ace artist Rodger McPhail down to put the finishing touches to our Passion book, promising him a fish for his troubles and he caught a feisty little mirror to end our  celebration with some fun. 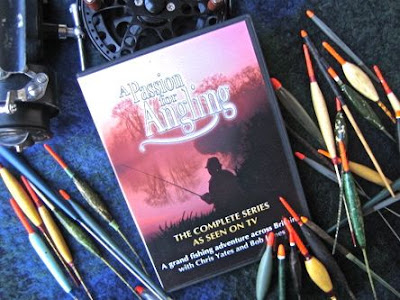 Sadly we have run out of copies of our film following Chris's carp fishing adventures "Caught in Time".